In 2016-17, a pilot study was conducted with critical facility managers in Westerly, RI, using semi-structured interviews and participatory mapping. Interview methods were based on existing practices for vulnerability assessments, and further augmented to obtain compatible data for use with hurricane modeling outputs. Westerly is a coastal community on Rhode Island’s southern coast with a population of about 18,000 as of 2010. Westerly was chosen as the pilot community because of its relatively small number of critical facilities and high level of hazard exposure. The combination of hazard exposure and limited number of facilities allowed for investigation of interdependencies between facilities and cascading consequences of particular concern to emergency managers. 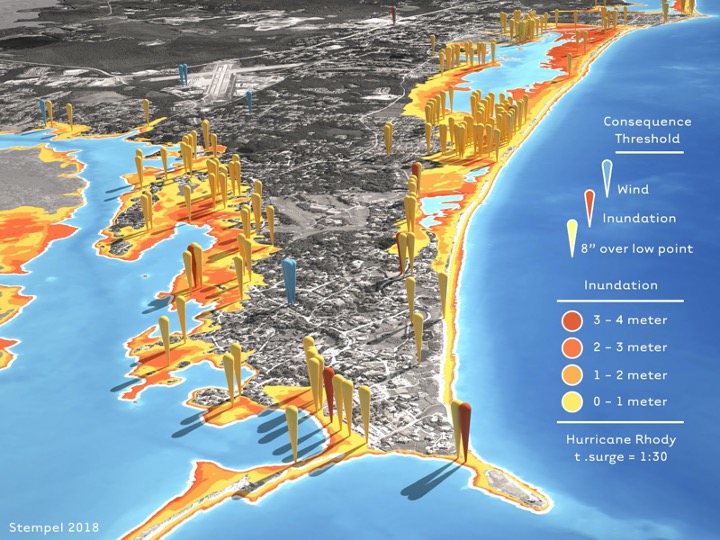 Left: Storm impact model for Westerly’s critical facilities showing wind and inundation CTs triggered by hypothetical Hurricane Rhody 30 minutes (Panel A) and two hours (Panel B) after Rhody’s landfall. The red pin in front is a CT triggered by one foot of flooding and represents a fire chief’s concern that, “When it floods above a foot here, we can’t reach the homes around the lighthouse.” Yellow pins show where inundation blocks roads.

The Westerly pilot study was carried out in collaboration with the Rhode Island Emergency Management Agency (RIEMA). The collaboration facilitated conversations with local Emergency Managers to identify critical facilities in Westerly, a necessity as infrastructure vulnerability information is generally proprietary and sensitive. A total of 30 critical facilities were identified, including fire departments, police stations, hospitals, and waste water treatment plants. 13 facility managers from 11 of 30 critical facilities in Westerly were interviewed. This included four fire departments, the police station, the dispatch center, the ambulance corps, the waste water treatment plant, the water department, the largest electrical distribution substation and the department of public works.

An open-ended interview instrument was used to collect a wide range of facility manager storm concerns. Facility managers were asked for their immediate hazard concerns during a storm and were also prompted to consider how storm consequences on other parts of the community (e.g. roads) could affect their facility. Interviewees were asked for the location of their concern(s) and for the perceived threshold(s) (e.g., inundation depth, wind force) which would trigger their concern. A single Consequence Threshold was created for each concern, composed of the location of the asset of concern, the modellable hazard or storm force perceived as a risk to that hazard, the threshold of the storm force which triggers the hazard, and the consequence of that threshold being triggered. This collection method resulted in the identification of 201 Consequence Thresholds (CTs).

After the CTs were collected, they were integrated into a high-resolution storm surge model (ADCIRC) coupled with nearshore waves (SWAN) hydrodynamic model. For the Westerly pilot study, a synthetic hurricane based on several historical storms that have impacted the region, called Hurricane Rhody, was developed to simulate the effects of a high-impact storm on the coast. Once the CTs were integrated within the storm model, the parameters of the model (e.g., surge, wind speed, and flooding) triggered concern thresholds upon running the model. Not all of the 201 collected CT could be incorporated into the Westerly storm impact model. Two primary challenges when integrating the CTs with the storm impact data were identifying quantifiable modellable thresholds for each CT (e.g., 1 ft of inundation, 80 mph wind speeds) and unknown locations of concerns. These are of vital importance for integration with the storm impact model as the outputs of the model are water levels, wind speeds, and waves throughout the time series of the storm at each geographic location within a modeled area. As a result of these challenges, only 96 of the 201 collected Consequence Threshold were incorporated into the storm impact model for the Westerly pilot study.
‍
After incorporating the 96 Consequence Thresholds into the storm impact model for Westerly, the results were utilized to develop a hypothetical damage timeline resulting from storm Rhody and is shown in Box 1. As inundation and winds increase during the storm, different CTs throughout Westerly are triggered and the box details the impacts resulting from these triggered CTs and the time during the storm when the CT is triggered.
‍
While the Westerly pilot study only integrated the collected local CTs with one synthetic storm, the hypothetical scenario shows how incorporating qualitative consequences into storm impact models can facilitate storm hazard scenario planning to help communities to prepare for disasters.