Hurricane Rhody and Ram are hypothetical, yet plausible hurricane scenarios created to simulate the effect of high-impact storms in Rhode Island. These scenarios will allow the state and local agencies to better understand the consequences of coastal and inland hazards associated with extreme high-impact landfalling hurricanes and to better prepare the Rhode Island communities for future risks.

This scenario involves a major hurricane that starts near the Bahamas and propagates northward close to the U.S. East Coast. While staying close to the coast (like Hurricane Carol 1954) it moves much more quickly (like the Great New England Hurricane of 1938). Early in the morning of September 18, Rhody passed near Cape Hatteras, NC with the forward speed of 30 mph, the eye diameter reaching 80 miles and maximum wind speed 138 mph.

After passing Cape Hatteras the hurricane continued to accelerate north-northeastward with a forward motion of up to 45 mph. This rapid movement did not give the hurricane a sufficient amount of time to weaken over the cooler waters before it reached Long Island with peak winds of 132 mph. Quickly crossing Long Island Sound, the hurricane made landfall again with the center near Old Saybrook, CT causing a huge storm surge in Narragansett Bay and along the south shore of RI. After the landfall, Rhody slowed and turned to the east.

Images and description below.

The Hurricane Ram scenario involves a major hurricane that starts near the Bahamas and propagates northward close to the U.S. East Coast. While staying close to the coast (like Hurricane Carol (1954)) it moves more quickly. Ultimately, the storm makes landfall in eastern Long Island and then in Rhode Island, as a strong Cat 3 hurricane causing a significant storm surge in Narragansett Bay and along the south shore of RI. Then, shortly after its landfall, the storm slows down, producing heavy rainfall.  The total rainfall reached more than 18 inches in some areas causing massive river flooding in Rhode Island, similar to Hurricane Diane (1955) and the March 2010 floods.

Right: Examples of surface wind speeds from Hurricane Rhody at different times during the storm's simulation.

In the evening of Sept. 18, the storm center moved right over the city of Boston with the peak intensity of 116 mph. After entering the water again, Rhody turned to the southeast and started to execute a large loop on Sept. 19 by turning back to the west and subsequently to the north somewhat similar to Hurricane Esther (1961). Warmer Gulf Stream waters allowed the storm to weaken only gradually. On Sept. 20, Rhody made the second landfall as a Category 2 hurricane in Rhode Island, producing strong winds and heavy rainfall and causing massive river flooding in RI. 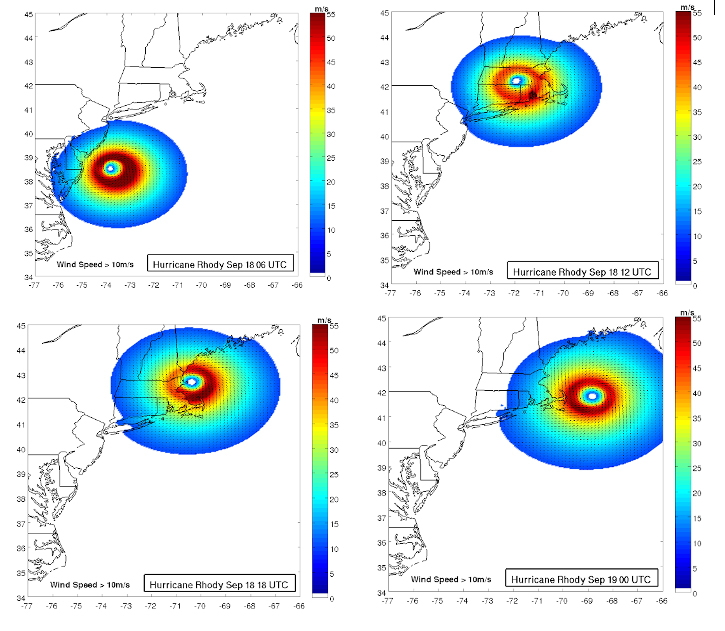